May 25, 2022 9:00:00 AM
Words and sketches by Taylor Reese. Art by Jesse Naguib.
Some people have no idea what innovation is. Others will tell you in very certain terms what it is…or is not. If you look up innovation in the dictionary the central idea is new, and I hope we can all agree on that.

Many people trying to describe innovation would point at an object near them, likely a piece of technology such as a drone or VR headset, for example. Devices like that exemplify many aspects of modern, technology-based innovation. But the same dictionaries that gave us new also hint at another critical detail in understanding innovation. It is both the process and  the outcome. At DevFacto, we’ll tell you that it’s important to focus on both. If you never deliver an outcome, you haven’t really done anything. If you only deliver once because you have no foundational process behind your work, your company will disappear quickly.

Exploring the definition further, innovation comes in one of three ways: people, process, or technology. We can talk about innovations that have landed in each area, though often the best innovations balance all three. You can also think of these as opportunity spaces. With my background in design thinking, I gravitate towards the people side and often unearth my revolutionary ideas there. I have found that regardless of the nature of your work, if you’re solving a real human problem there will be value in what you produce. 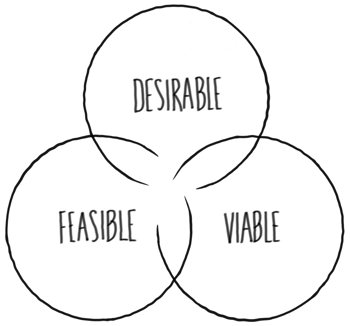 Value is a big deal. If there is low or no value in the idea, you need not bother delivering anything. And because the essence of innovation is new, assessing value can be really tricky. Gauging value might also need to occur multiple times as you learn more, involve different perspectives on your team, or release and test in phases. At DevFacto, we find that desirability, feasibility, and viability are always broadly applicable valuable lenses for assessment. In plainer language we often say should we, could we, would we? At the end of the day, you need to be confident that your idea has value.

When I run ideation sessions to generate and capture ideas, one of the final activities is voting up the best ideas so the team can narrow its focus and identify the highest value ideas. In this first assessment, the question driving us is typically “what is the one idea on the board we have to do, if we can do nothing else?”. This question targets the heart of desirability. Simplicity is key here. Getting people to shut down judgement long enough to think big, and then judge those thoughts from only one angle can be a big ask. Asking an engineer who is likely to be involved in building the ideas you’re generating to vote with her gut, and not worry over how hard an idea might be to build, is incredibly counter-intuitive.

If a room full of a variety of people with different backgrounds, skill sets, and perspectives collectively vote up just a few ideas from a wall full of them, you likely have ideas that will make an impact. We believe this is a critical ingredient of innovation. Innovation has to make an impact.

Some believe that innovation has to be big. Change-the-fabric-of-the-universe big. Our experience suggests that this view can hold you back. Holding out for a big bang will often keep you from delivering positive change as you go, and it’s less risky to build a big bang from many smaller changes. We classify innovation in three sizes: incremental, evolutionary, and revolutionary. Any time you can make an impact, you have the opportunity to review, grow, and adapt based on what you observe.

Looking back at projects DevFacto has delivered over the years, we have produced many incremental innovative things as well as some larger evolutionary or revolutionary outcomes. Sometimes they’re dependent on one another, in the same way that building a telescope requires a convex and a concave lens. Other times they might be unrelated, adding value in different impactful ways. For example, an incremental impact could be improving the functionality or usability on a single page where a user completes an action. An evolutionary impact might be revising the whole flow around that action to make it easier, faster, or more intuitive. A revolutionary impact could be delivering the service in a brand-new way, or to a group of users who didn’t have access to the service before.

In summary, innovation is both the process and outcome of doing something new that makes an impact. A great way to assess your new idea during the process is through the lenses of desirability, feasibility, and viability. The impact of your innovative work can be incremental, evolutionary, or revolutionary. Delivering many smaller incremental impacts can grow (with work and intent) into either of the larger two.

At DevFacto, we’ve spent years honing our approach to applying innovation in the software space. We’ve partnered with all kinds of customers in many industries to find innovative opportunities and deliver software that makes an impact. If you don’t know where to start, or you’re ready to make a three year plan for world domination, get in touch. We’d love to help!

Taylor Reese is our Principal Innovator based in Edmonton, Alberta. His background is in design and facilitation, but he also loves drawing, cycling, and craft beer. He believes the things we build must improve the lives of those who use them. You can follow some of his adventures on LinkedIn or instagram – @sketchnote.love.

Jesse Naguib is an illustrator currently earning their Bachelor of Fine Arts at NSCAD University. They specialize in narrative illustration and sequential media. Jesse can be found on various social media sites such as Instagram, Youtube, and Patreon.

For this piece, they write "This article reminded me of the human aspect of innovation and how important it is to share ideas amongst your peers and fellow workers. Communication is more critical than ever when you are turning an idea into an impactful product or service."