The Art of Sketchnoting

Everyone can do it

I used to take notes in school, but they didn’t look like this. Well, maybe the margins did. 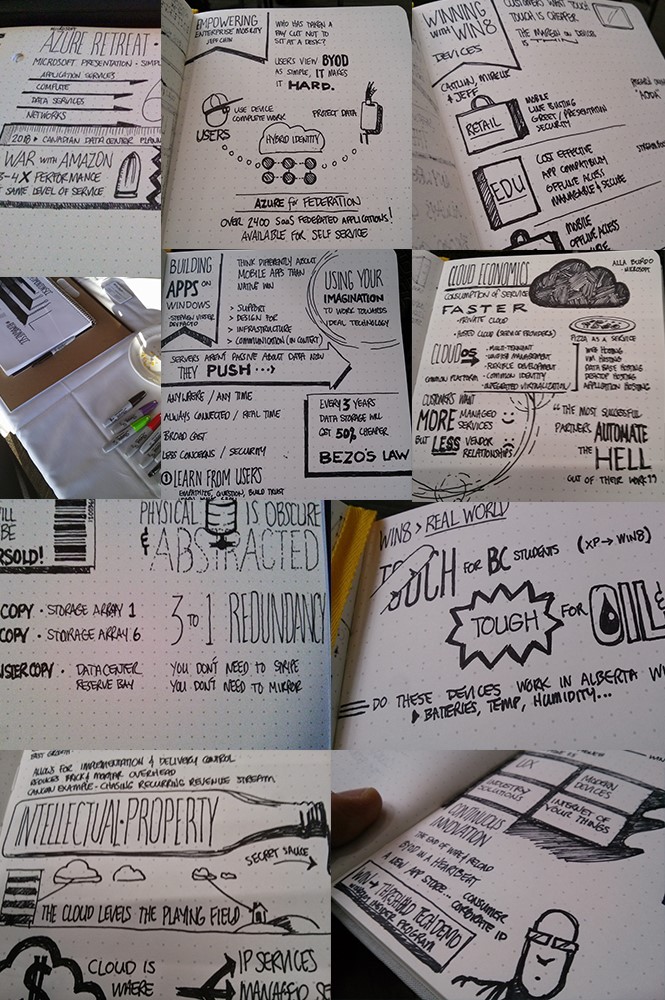 The two modes of thought behaved as if on a segregated kiddie plate rather than on a page, never mixing and never wanting to. One day, many years ago now, I forgot to bring the kiddie plate to work. Notes became a collection of images and text, meant to convey the ideas contained therein as quickly or with as much impact as possible.

I kept on sketchnoting because it became really quick, and it improved my memory of information presented to me, no matter the context. Now I have a visual for every interesting fact or quote presented to me.

I soon started getting compliments in meetings. It has helped that there haven’t been that many days in my life in which I didn’t draw. But after my first compliment response (often a “thank-you”) I often follow up with a suggestion that “you can do this too”.

The only thing holding you back from sketchnoting is that you don’t spend time writing or drawing. The process of sketchnoting is unique, in that the only rules are those you slowly build yourself. I’ll talk about some of my rules later. It is easy to start sketchnoting because the barriers are low, because there is no expectation (beyond the goals you set for yourself) that govern what the page looks like when you’re done.

Why not look at some other examples? 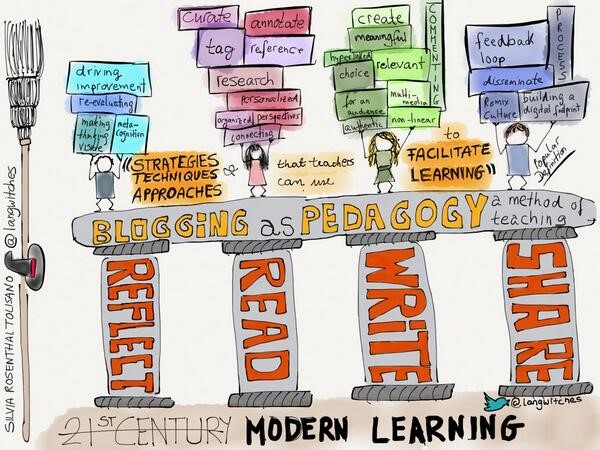 @langwitches sketchnoted this while thinking about blogging vs pedagogy 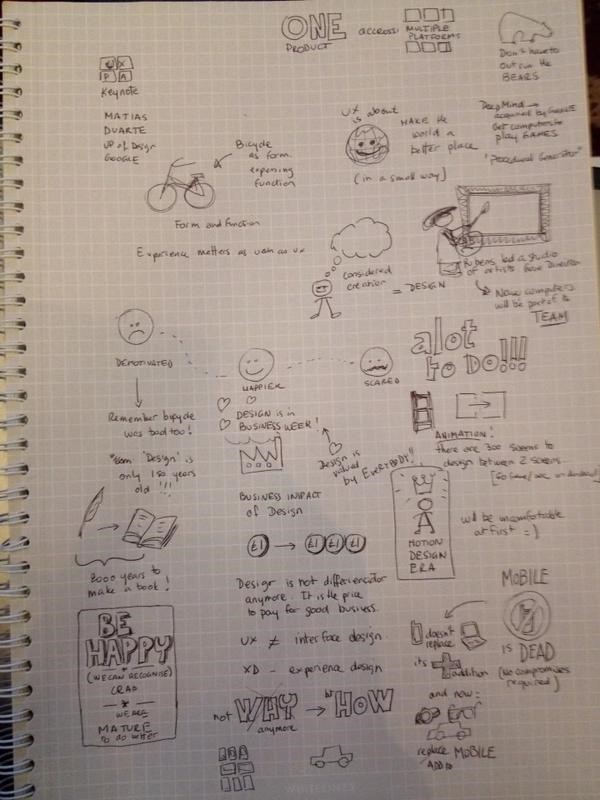 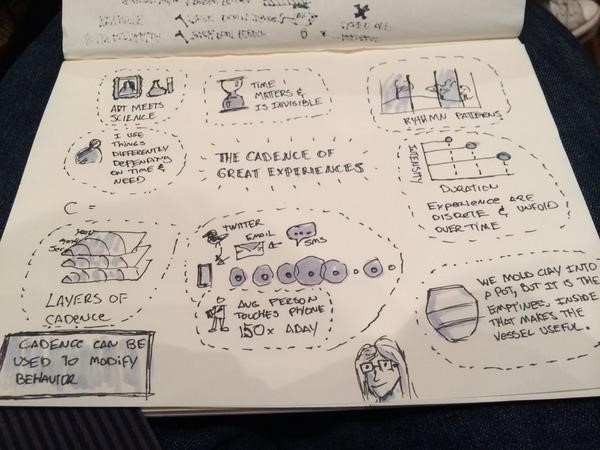 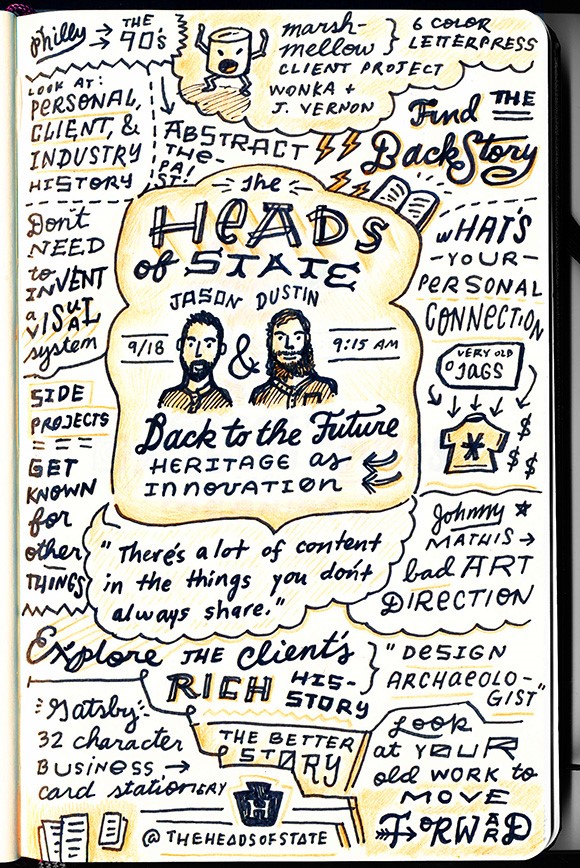 As you can see, the format is whatever works for the note-taker. You make the format; you make the rules. Do you like a clean page or do you jam every idea into every empty corner? Do you divide things up or allow the eye to float between topics or ideas?

By definition, sketchnoting is simply visual note-taking and the only rule I’m aware we all follow is speed. This is by necessity; you need to be able to keep up with a speaker, whether they are in a meeting next to you, presenting at a conference, or giving a webinar.

The only way you get good is by practicing. I’ve heard of people practicing to pod casts, but I’m sure most of us get invited to enough meetings and talks that we do not need to look for sources. Over time, you will get more comfortable, you will get faster, and you will start to develop your own quiet set of rules.

Here are some of my rules

I will allow myself to write or draw an idea. My rule is that I want to use the most efficient means of communication possible. Will a picture relate it quicker than a handful of words? Then draw it. This is more deceptive than it sounds. It’s often easier to write, but laziness has never been a cornerstone of good communication.

I always try and instill a sense of hierarchy. This can be really tricky to do live, as ideas unfold and connect. Sometimes the strongest relationships are immediately apparent and sometimes they surface later. I use headings and size in an effort to passively communicate as much as possible.

Sometimes I depend heavily on chrome for context. For instance, in a web conversation, I’ll note things using visual conventions from the internet like buttons, tabs, and navigation. I will even throw a search box or form field in, if it makes sense.

Icons can work really well as guideposts in a really busy page of notes. I fall in and out of love with them, for no reasons that I know of.

Backgrounds and boxes can provide quick structure to group and, in many cases, ungroup things you need to divide. Let’s face it, sometimes there just isn’t enough room on the page. Think about whether you’re trying to give an idea room to grow and relate to what is around it, or wall it off.

This wouldn’t be a complete discussion without mentioning tools. Some people will use any old pen and any piece of paper they can get their hands on. Low fidelity is all about efficiency, cost effectiveness, and quick communication. With that said, I am often quite particular about my tools.

Sharpie makes pens. They have a felt tip, the ink doesn’t bleed or smudge, and they’re cheap. The only hit is that some of them soak through the back of the page.

For paper, I thought I had it pinned down with BeHance’s Dot Grid books. That’s right, I don’t use blank paper, lined paper, graph paper, isometric paper, or handmade steel ground birch bark artisanal paper. A dot grid gives me a gentle guideline because sometimes I want (need) things to line up, without walling me in otherwise. Then Baron Fig came around, quietly, through kickstarter. I initially thought I would struggle with the smaller size of the Confidant, but having used one for almost all of 2014 now, it has not been bad at all.

Every now and then, I take a stab at using colour. Then I quickly check myself, and go back to a single black pen. Sometimes I will grab some grey copic markers, but often I want to carry as little as possible.

And that’s it. The tools are as cheap as you like, easy to replace, and with smartphone cameras, easy to share.

Which brings us to another angle.

I was recently at a Microsoft Summit (sketch noting, of course) and I asked a mobile product rep when this (Surface 3) could replace this (Baron Fig Confidant). He said, “right now”, and confidently handed me the stylus. 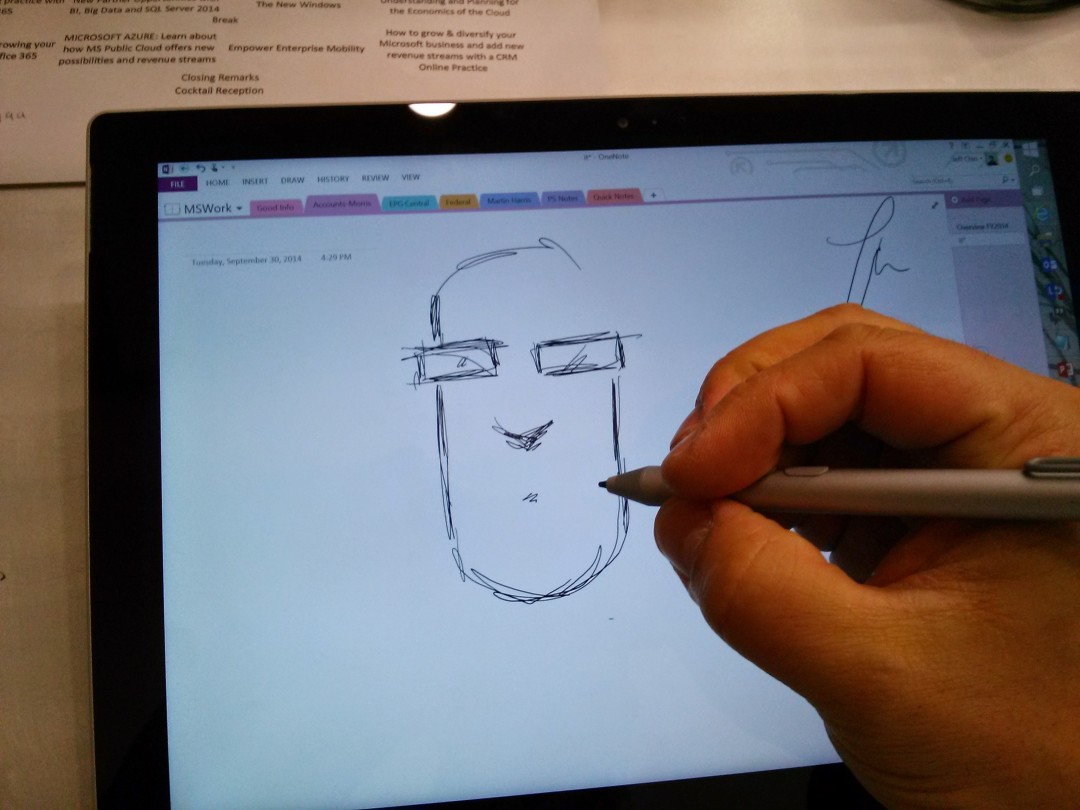 I’m not sure how soon I’ll be putting that to the test, but I’m willing to give it a try. The part about this that really gets me going is that dreamed of moment when I’m sketchnoting in a meeting or workshop with that tablet connected to the big screen, illustrating concepts that are best conveyed visually with a group of people trying to get on the same page.I